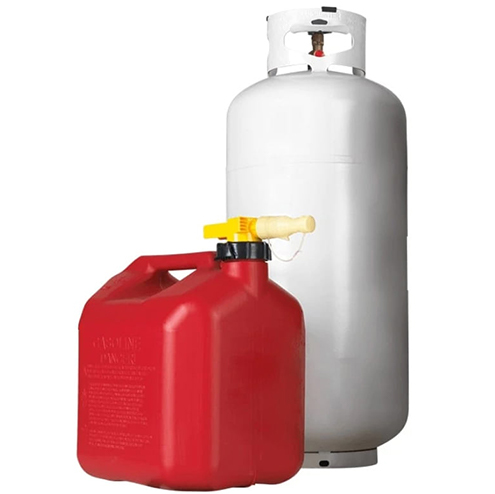 The Difference Between Dual Fuel and Single Fuel Generators

Simply put, one works with just one fuel (gasoline) and the other with two fuels (gasoline and propane). On some dual fuel models you can switch fuels on the fly. But don't think for a moment that a dual fuel generator can work with both fuel at the same time, because it can't.

Basically, dual fuel models have become more popular because they are more versatile than single fuel models. And that's because not only can you can choose which fuel to use, but also which fuel to store.

A lot of people buy a portable generator as a kind of insurance policy, and the more versatile that policy is the better.  For most of the time the generator is put into storage, and only taken out when the power goes down, or when they encounter another emergency. But to be any use a generator needs fuel.

So which fuel is best? Let's have a look.

In a word, power. When compared to propane, gasoline has a higher energy density. This means that burning gasoline generates more watts, as you'll see from the different outputs of the Dual Fuel variants we provide details of.

Gasoline is also more widely available and generally cheaper watt for watt than propane, which in some cases can cost twice as much.

The Problem with Gasoline

While gasoline is not especially flammable, its vapors are highly combustible and therefore the fuel needs special storage. Each state may have regulations on how much gasoline you can store. Above these limits, you'll have to check with your local Fire Department as they may need to review and authorize whatever installation you plan on making.

Fire codes generally restrict gasoline storage to no more than 25 gallons, but this can vary from state to state. Whatever the limit, it has to be stored in specially approved containers with a maximum capacity of 5 gallons. Here is an example from Colorado.

Stored in sealed containers under shelter, gasoline has a life of one year. However, after a container has been opened, and the seal broken, the storage life plummets to six months at 20°C and three months at 30°C. And in equipment tanks (generators, lawnmowers etc.) it has a life span of just one month.

This is because gasoline is made up of lot of individual components each of which has varying properties. When stored outside in an open container, gasoline eventually evaporates completely. And while this process takes place, gasoline changes in composition resulting from the separate parts evaporating at different rates. This is what causes a severe deterioration in the fuel's performance over time.

Portable generator fuel tanks are relatively small and only allow the unit to run for some hours before you have to refill the tank. While that in itself is not a great problem, it can be an inconvenience, for example, in the middle of the night or when the weather is bad.

But the real problem occurs when gasoline is left to deteriorate in a generator's carburetor or fuel tank while it's in storage. This deterioration can gunge up the fuel lines and carburetor, which prevents the generator from working at all, and probably just when you need it most, without some major maintenance.

One solution to the problem of deteriorating gasoline is the use of a fuel stabilizer. These are specialized products which can mitigate against the problem of gasoline breaking down and provoking serious problems for up to 2 years according to the manufacturers. While using a fuel stabilizer is recommended if a generator is to be stored for months, if it's for longer the best advice may be to drain both the carburetor and the gasoline tank. We provide here more information on fuel stabilizers.

Propane lets you run the generator for days without any intervention from you when connected to one of the largest tanks (120 gallon - 420lb). So running out of fuel during any emergency is much less likely.

Propane does not deteriorate over time. And generators running on this fuel need less maintenance because it doesn't leave carbon deposits in the engine and exhaust. Neither does it leave residues in the fuel lines.

It's also a leaner fuel when it burns, producing only half as much of the deadly carbon monoxide as gasoline. And being a "green" fuel, it's not an environmental hazard if it leaks from the tank, unlike gasoline.

The Problem with Propane

Propane is less efficient than gasoline, outputting fewer BTUs per gallon of fuel. In some cases, it can cost twice as much as gasoline, watt for watt.

Even though it's classified as a "green" fuel, it should never be stored inside a building, including your home. This is because leaking vapors are also an explosion hazard.

Propane doesn't become more viscous in cold weather, and therefore is a better choice for home owners who live in cold climates. But the gas regulator is prone to freezing up, and this can prevent the gas from getting through to the engine.

For you to get the full benefit of propane, in terms of an uninterrupted supply, you'll need to have some expert plumbing pipework installed to connect your generator to a large propane tank.

When substituting the propane hose supplied with the generator for a longer and perhaps larger one, you'll have to bear in mind that the pressure delivery will reduce and could impact on engine performance. You can get round this by choosing an appropriate regulator to connect to the propane tank.

The Choice is Yours

From the foregoing, you can see that both gasoline and propane have their pros and cons. But it's clear that the convenience and versatility of a dual fuel generator has made them a very popular choice, even though they are generally more expensive.

We have a good selection for you to look at here. So really, it's up to you!

In the meantime, we welcome feedback from owners on what they think of their dual fuel models, and of course from people interested in buying one.

What kind of problems do you face to hookup and run a duel fuel generator on propane?